Join us at the chapter house Saturday, September 1, 2019,

for an alumni tailgate to kick off the 2019 football season!

Details will be provided here once confirmed.

This event is free for all alumni, but any donations to help support the GRAA in hosting these alumni tailgates are always welcome and appreciated.

This will be the one tailgate for GRAA tailgate for the 2019 season, so we hope you’ll stop by the house to join us!

Join us at the chapter house this Saturday, October 27 for an alumni tailgate, hosted by the Gamma-Rho Alumni Association!

Kicking things off at 11:30am, Abbey Road Catering will be providing a build-your-own burger bar for lunch. Drinks are also available for purchase at a full cash bar, which will be open 11:30am-2:00pm.

This event is free for all alumni, but any donations to help support the GRAA in hosting these alumni tailgates are always welcome and appreciated.

We hope you’ll stop by the house Saturday as the Sooners return to Norman for Homecoming 2018!

The White Rose Pageant had not been held since 2015, and the new officers, led by High Alpha Sam Jackson (ΓΡ 5493) and High Theta Chapman Wise (ΓΡ 2823), decided to get it going again. So, with less than a month of planning and lots of very fast work, the White Rose Pageant was held on April 25, 2018, at the Sooner Theatre. Our active brothers were able to put together a great pageant and raise $2,500 for Big Brothers Big Sisters of Oklahoma.
We believe you can still help increase the total by contributing to the Go Fund Me page.

We are very proud this group of officers decided to bring back this worthy philanthropic event. ZAX!

The brothers of Lambda Chi teamed up with Pi Beta Phi for Scandals and presented “One Normal Night”. We placed second and won best A cappella, Best Supporting Male, and Best Supporting Female. 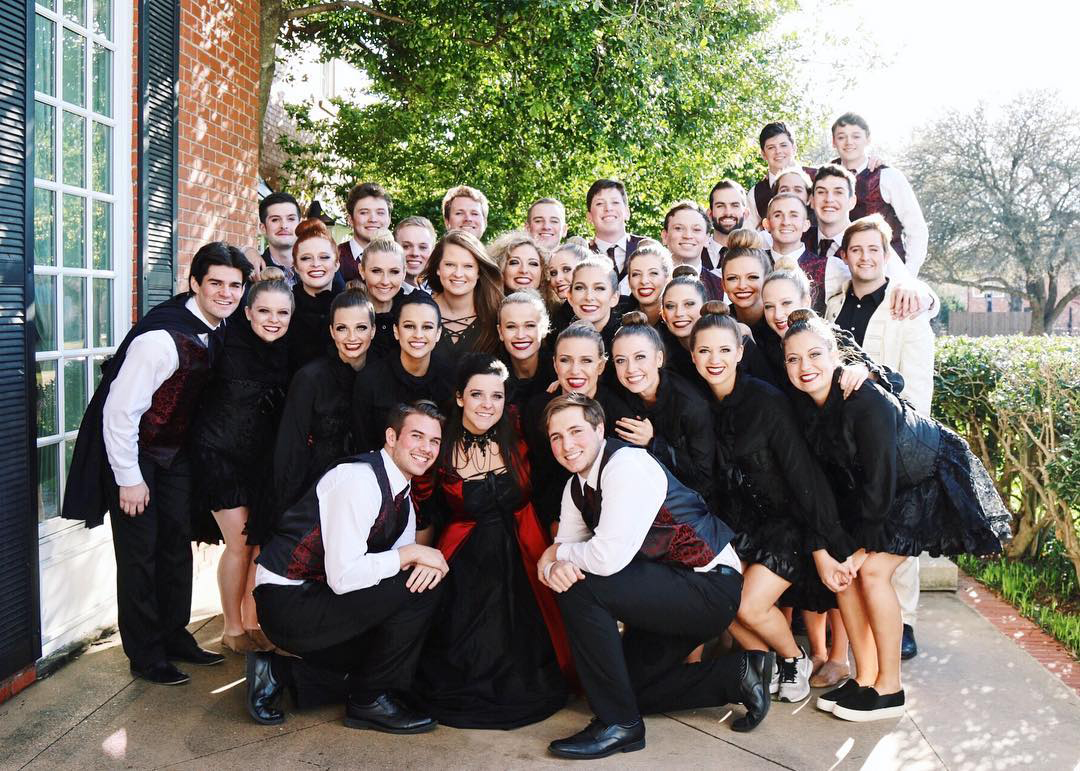 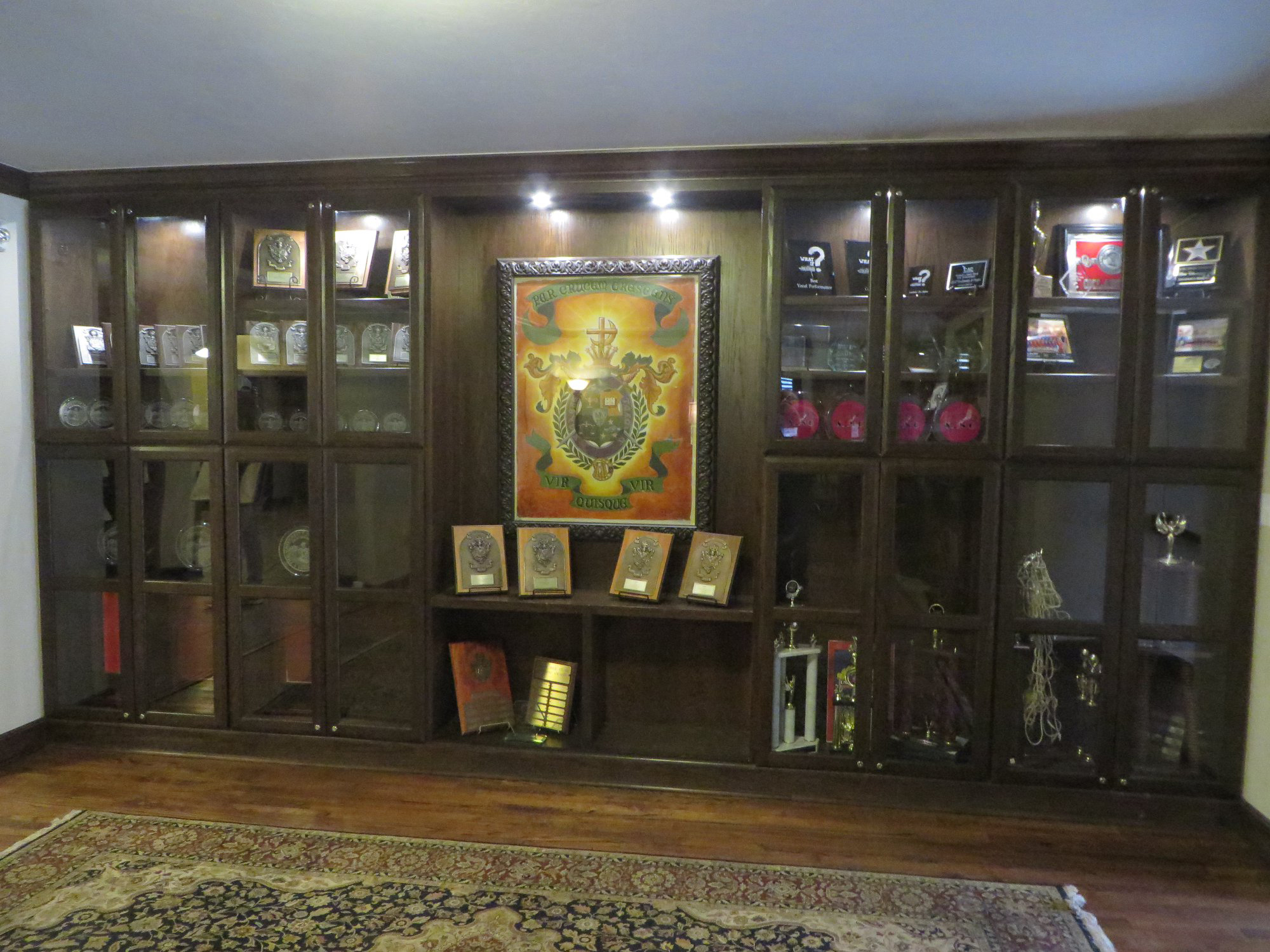 Our Parents Club has paid to have glass doors put on the new trophy case in the living room. Thank you parents! Many of you will recognize the Coat of Arms that was removed from the 3rd new hallway and preserved during the house renovation. It’s new location presents it well and for all to see.

Congratulations to Our 2018 Scholarship Winners!

The Gamma Rho Alumni Association presented scholarships and awards today during Mom’s Day Weekend at OU. Nearly $13,000 was awarded to 21 active brothers at Gamma-Rho, as follows:

(This was the very first Don Sherman award presented)

Thank you Eric Olivo (ΓΡ 1133) for representing GRAA and presenting the scholarships at the Parents Club meeting.

Thanks to all of our alumni who continue to support Gamma0-Rho through gifts to the OU Foundation. You can help support our active brothers by donating online. 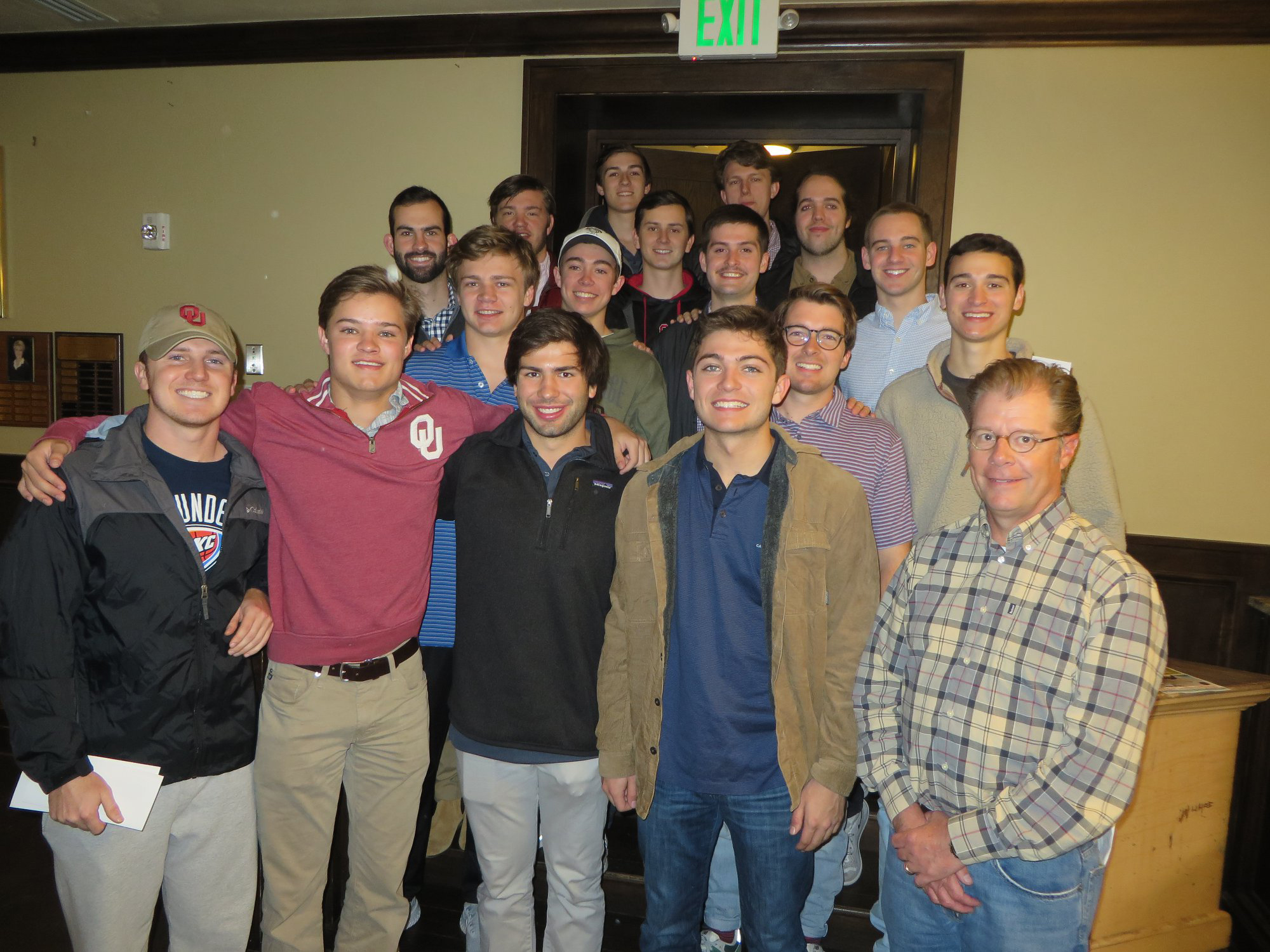 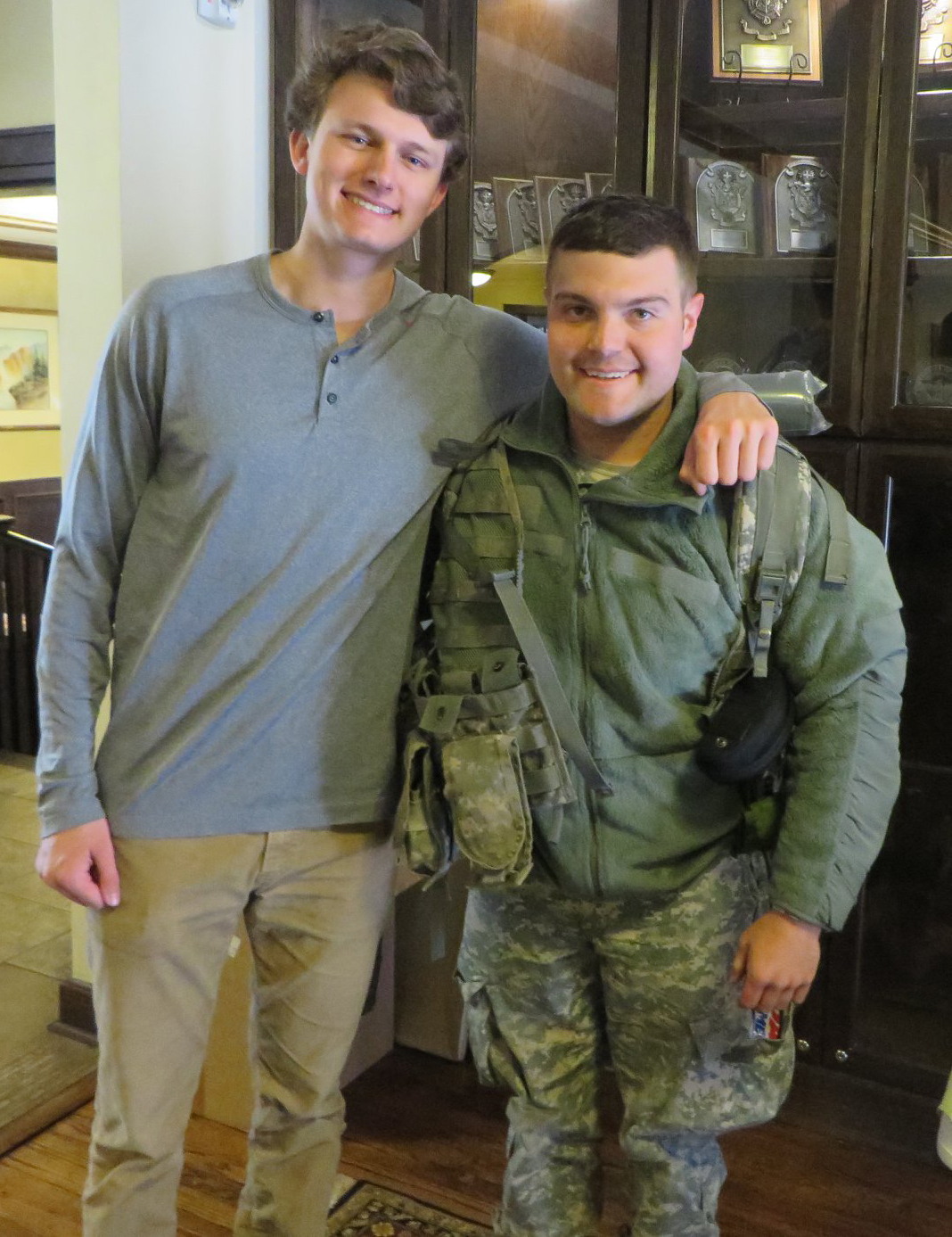 This year the chapter received the following recognitions in the annual President’s Trophy Award competition:

Congratulations to our active brothers!

Congratulations to our 47 new Gamma-Rho Initiates!

Thanks to the generosity of some of our alumni and donors, our historic intramural championship fence has returned! The fence had not been been replaced since the chapter house renovation, but thanks to the leadership of former High Rho Josh Cardosi (ΓΡ 2710), the fence again looks as it should.

You can read more about the fence restoration in the Spring 2018 edition of the Gamma Rhover newsletter.

If you are interested in helping the chapter and Gamma-Rho Alumni Association on our next projects–repainting the basketball court and restoring chapter composite photos to be hung in the house–please contact us at oklahomalambda@gmail.com. 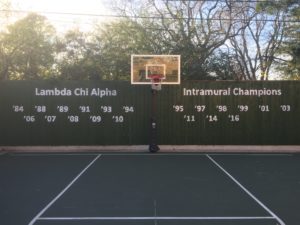 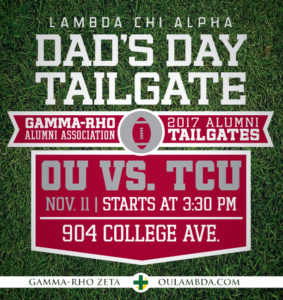 As the Sooners get ready for the biggest home game of the year, come by and join the Gamma-Rho Alumni Association for our final alumni tailgate of the year. The full, cash-only (no credit cards) bar opens at 3:30pm.

Come by to see the house, watch some football, and catch up with old friends. We hope to see you there!

This weekend is Homecoming Weekend 2017! Join us on Saturday, October 28, for an alumni tailgate at the chapter house. The tailgate will start at 4:00pm.

Free food will be available in the dining room, catered by Rudy’s BBQ. Sooner Legends will be providing a cash-only bar. PLEASE BRING CASH, not credit cards. Domestic beers available for $3, imports for $5, wine for $6, mixed drinks for $7.

This event is free for all Gamma-Rho alumni, members, and their families. As always, donations are appreciated, as they solely fund these events for alumni. There will be a table where you can donate to the Gamma-Rho Alumni Association and update your alumni contact information. Thank you for your generosity.

We look forward to seeing you for Homecoming on Saturday. Boomer! 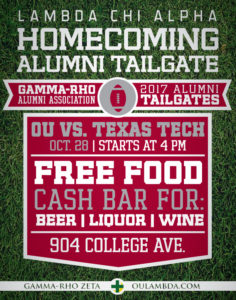 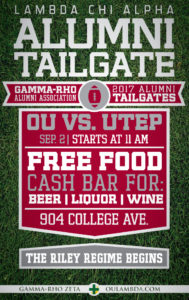 Join us at the chapter house on Saturday, September 2, to kick off the season and the Lincoln Riley era with an alumni tailgate! The tailgate will start at 11:00am.

Free food will be available in the dining room, catered by Sooner Legends. Sooner Legends will also be providing a cash-only bar in the front yard. PLEASE BRING CASH, not credit cards. Domestic beers available for $3, imports for $5, wine for $6, mixed drinks for $7.

This event is free for all Gamma-Rho alumni, members, and their families. Donations are always appreciated–please help the GRAA fund these tailgates!

We look forward to seeing you Saturday. Boomer! 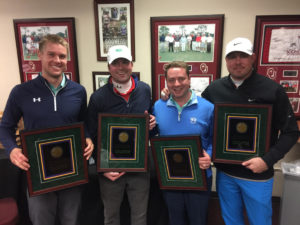 Join us for the Loyd Harris Alumni Golf Tournament

Congratulations to Our Spring 2016 Scholarship Winners!

OU’s Homecoming weekend was held October 28-30, 2016.  Among the festivities of the weekend was the crowning of Gamma-Rho’s latest addition to a long line of OU Homecoming Kings. David Doshier (ΓΡ 2593) and Sarah Stagg were named OU’s 2016 Homecoming King and Queen. David is now the 12th Gamma-Rho member to claim the title since the award’s inception in 1985. 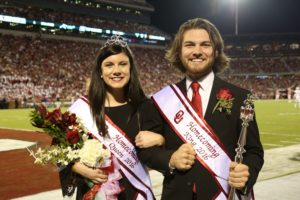 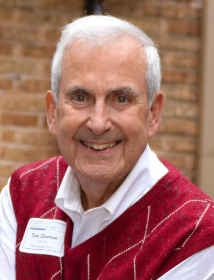 It is with great sadness in our hearts that we report to you the passing of Brother Donald Neil Sherman (ΓΡ 374). Don passed at 2:30am on Saturday, September 24, after a long battle with congestive heart failure. One of Gamma-Rho’s most beloved alumni, Don’s leadership and loyal service to Lambda Chi Alpha played a monumental role in providing us all the opportunity to be a part of this organization that shaped our lives.

A memorial service is scheduled for 3:00pm on Tuesday, September 27, at McFarlin Memorial United Methodist Church in Norman.

Mary has informed us that they are setting up the Lambda Chi Alpha Don Sherman Brotherhood Scholarship at the OU Foundation. Gifts in lieu of flowers may be sent to the OU Foundation with instructions to be placed in this scholarship. More information about this and the celebration of Don’s amazing life can be found here.

We have lost a great one who cannot be replaced.

This fall the Gamma-Rho Alumni Association will be again hosting official alumni tailgates at the chapter house.  $20 per wristband gets you food and beer, and a full cash bar will also be available.  Tailgates will take place three hours prior to kick off at the chapter house.  Be sure to save the following dates:

Tailgate details are subject to kickoff times for each game.  The best way to find out details about the tailgates and other alumni events is by  updating your contact info with the Gamma-Rho Alumni Association.  You can also visit the official OU Lambda Chi Alpha Alumni Facebook page. 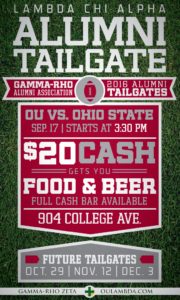 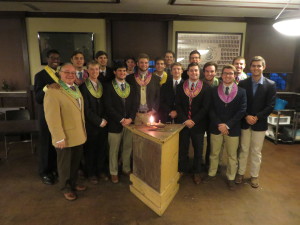 The new chapter officers were officially installed on Sunday, December 13, 2013.  The officers who will lead the chapter this next year are:

We had a great turnout for the Room Naming Ceremony, where we recognized the generous alumni donors who helped make the 2013 chapter house renovations possible. Hundreds of alumni, current members and their parents joined for the ceremony and accompanying tailgate, hosted by the Gamma-Rho Alumni Association.

We hope to see you next football season at our alumni tailgates!  Be sure to update your contact info to receive news from the Gamma-Rho Alumni Association. 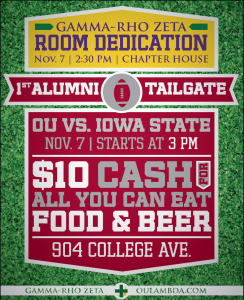 Join the Gamma-Rho Alumni Association and current Lambda families for the official Room Naming Ceremony, commemorating the generous gifts by chapter alumni in support of the recent chapter house renovation and expansion.

The Room Naming Ceremony will take place at 2:30 at the chapter house, followed by the season’s first alumni tailgate, which will offer all you can eat food and beer for $10. 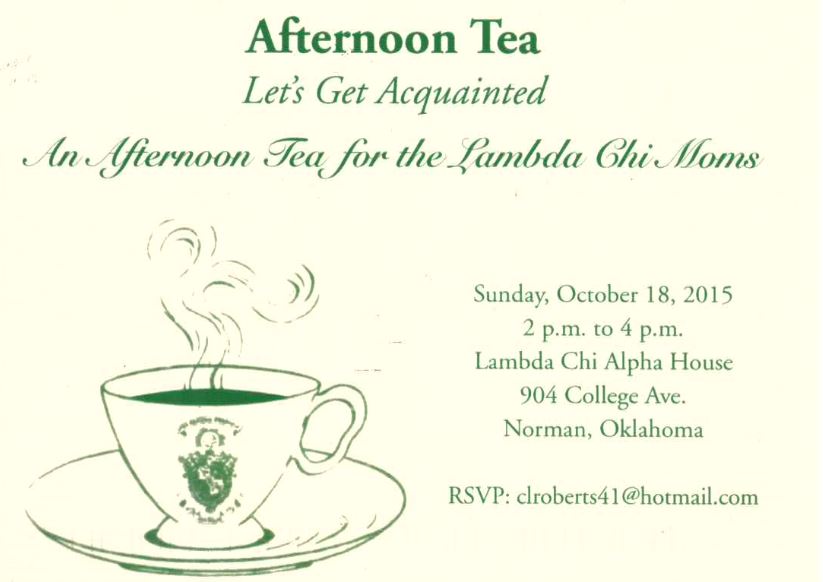 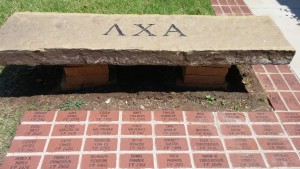 The Parents Club of the Gamma-Rho chapter have joined efforts with the Lambda Housing Corporation in selling bricks as a fundraiser.  Ordered bricks will be installed in the sidewalk around the Lambda House.  The Parents Club will receive a portion on the first $100 of every brick order and the balance will go to the Housing Corporation in support of the house renovations. 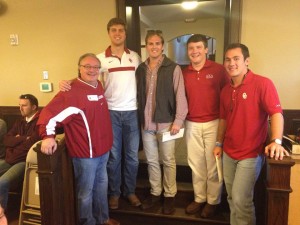 OU’s Homecoming weekend was held October 17-19, 2014.  Gamma-Rho partnered with the women of Kappa Kappa Gamma, the men of Lambda Phi Epsilon, and the men of Phi Kappa Psi to compete in the annual Homecoming competition.  The group won first place in the Homecoming Rah Rally dance!

You can view the video of the winning dance HERE.

Also during the weekend, 2013 Homecoming King Ray Wolber (ΓΡ 2467), passed the crown to Jake Pasdach (ΓΡ 2473).  This marks the fifth time in the last eight years that a Gamma-Rho member has been voted OU’s homecoming king by the student body, and the sixth time in eight years that Gamma-Rho has had at least one member in the Homecoming Royalty Court.

Gamma-Rho Zeta had a solid recruiting season this year.  High Delta Danny Price (ΓΡ 2574) our recruitment team, and Chapter did an outstanding job of putting together a great associate member class for 2014. 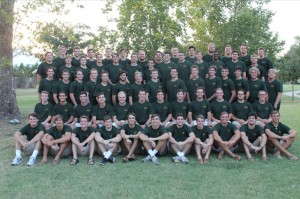 For the fourth time in five years, a Lambda Chi has been elected by the student body as OU’s Interfraternity Council President.  Jake Pasdach (ΓΡ 2473) and a Public Relations junior from Claremore, Oklahoma, was announced as the new IFC President on November 7, 2013.  Jake will assume the office previously held by Drew Knox (ΓΡ 2437) of McKinney, Texas.

Prior to the voting period, Jake spoke to fraternity chapters across campus about this platform ideas.  Elections were held November 5 and 6.  Students voted online and the results of the election were revealed on November 7.

2013 was another fantastic year for Lambda Chi in OU’s Homecoming competitions. Partnering with the women of Pi Beta Phi and Sigma Phi Lambda, the group finished 2nd overall, with individual 1st place finishes in both the sidewalk chalk and south oval board competitions.  The group placed 3rd in the dance competition.

High Beta Ben Laptad (ΓΡ 2424) and High Alpha Ray Wolber (ΓΡ 2467) were both selected as two of the five men at OU to be a part of OU’s Homecoming Royalty Court.  Ray was voted as OU’s Homecoming King by the student body.

This year marked the fifth year out of the last seven in which at least one Lambda Chi was nominated to OU’s Homecoming Court.  In those seven years, the OU Homecoming King has been a Lambda Chi for four of them.

The cutting of the ribbon was done by all actives and alumni in attendance.  The ribbon was stretched around the entire property, with scissors distributed, allowing all present to take an active role in the dedication.

While the renovations are complete, we still need your help to finance these much-needed improvements.  Donations can be made here. We thank you for your consideration of a gift of any size!

CLICK HERE FOR MORE PHOTOS OF THE RIBBON CUTTING

This fall, Lambda Chi will be hosting official alumni tailgates at the newly renovated chapter house!  Come by and enjoy some food and beverages while touring the new chapter house renovations.  Tailgates will take place three hours prior to kick off at the chapter house.  Be sure to save the following dates:

Visit the official OU Lambda Chi Alpha Alumni Facebook page for additional information.  Be sure to “like” the page in order to keep up with the latest chapter news!

Commitments are still needed from the rest of our alumni to achieve our goal of financing the complete renovation of the chapter house.  All donors contributing a minimum of $2,500, over a five-year period, will be recognized on a plaque prominently displayed in the chapter house.